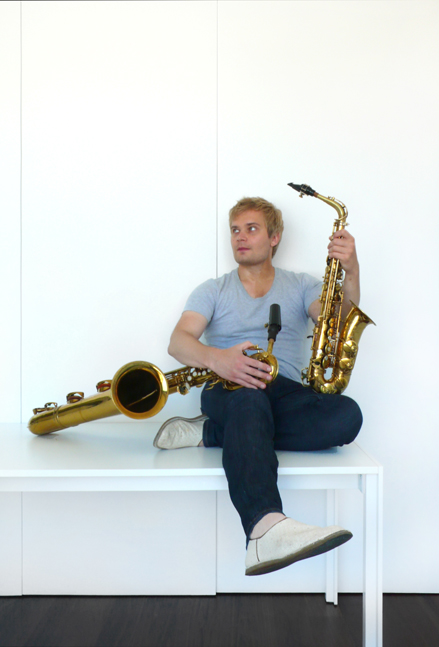 Mikko Innanen is a Finnish saxophonist and composer born in Lapinjärvi, Finland in 1978. Having began to play the alto saxophone at the age of ten, he was introduced to jazz through his father’s record collection and by his first saxophone teacher Bengt Ingelin. His early favorites included such jazz giants as Charlie Parker, John Coltrane, Ornette Coleman, Duke Ellington, Johnny Griffin, Billie Holiday, Thelonious Monk and Ben Webster.
After studying at the music school of Loviisa, a small town where he moved with his family in 1988, and at the Pop/Jazz School of the near-by Porvoo, and being a member of the Loviisa wind orchestra and the Porvoo Big Band Innanen moved to the Finnish capital Helsinki in 1994 to study at the Jazz Department of the Sibelius Academy. He received his Master of Music degree from the Sibelius Academy in 2003. His studies also included a year (1998-99) as an exchange student at the Rhythmic Music Conservatory in Copenhagen, Denmark.

In the last ten or so years, Innanen has established his position as one of the most innovative saxophonists and composers on the Finnish and the Nordic scene for jazz and improvised music. In 2000 he won the best soloist prize at the International Competition for Jazz Groups in Getxo, Spain and in 2001 he was awarded the first prize at the first Jukka Perko Saxophone Contest in Huittinen, Finland. In November 2008, he received the Finnish Jazz Federation’s annual Yrjö Award as the Finnish jazz musician of the year. Arts Council of Finland awarded him a three-year grant for artistic work in 2009. He was nominated for the Nordic Council's Music Prize in 2011. To date, he has published 18 recordings as a leader or co-leader and more than ten as a sideman.
Innanen is known for his participation as a leader, co-leader, featured soloist and/or composer in various groups, such as Mikko Innanen & Innkvisitio,  PLOP (with Ville Herrala and Joonas Riippa), Delirium (with Kasper Tranberg, Jonas Westergaard and Stefan Pasborg), Triot (with Nicolai Munch-Hansen and Stefan Pasborg), Gourmet (with Ilmari Pohjola, Veli Kujala, Esa Onttonen, Petri Keskitalo and Mika Kallio), Mikko Innanen Trio with Joe Fonda and Lou Grassi, Innanen/Sooäär/Bennink Trio, Mikko Innanen & Mika Kallio Duo and Innanen/Piromalli/Hauta-aho/Lovens Quartet. In addition, he is currently active with Kalle Kalima & K-18 (with Kalima, Teppo Hauta-aho and Veli Kujala), Pekka Tuppurainen Röd/Blå (with Tuppurainen, Magnus Broo, Aki Rissanen, Joonas Riippa and Jori Hulkkonen), Wade Mikkola’s Contrasts (with Mikkola, Manuel Dunkel, Georgos Kontrafouris and Klaus Suonsaari), Tonight At Noon (with Jukka Eskola, Jussi Kannaste, Mikko Helevä and André Sumelius) and The Chile-Finlandia Connexion (with Nicolás Vera, Sebastian Gonzalez, André Sumelius).