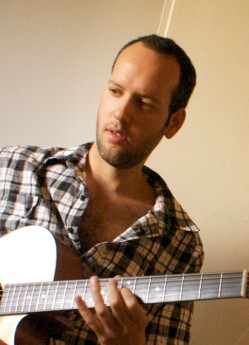 Israeli guitarist Ido Bukelman has been finding ways to extract tones, both harsh and gentle, from his chosen instrument since he was twelve. Ido played in a variety of highly creative musical projects as a leader as well as a sideman. Bukelman has developed a highly idiosyncratic style since releasing his first trio album, City Tail (Self Produced, 2009). At that time, he tended to reference saxophonist Ornette Coleman's harmolidics and guitarist Jimi Hendrix's pyrotechnics. With his trio he toured Europe in different Jazz festivals. Bukelman has worked closely with Israreli free-jazz horn players Albert Beger, Harold Rubin and Yoni Kertzmer, and is one of the most active artists in that scene in Israel today. Lately Bukelman has began to focus on solo acoustic works. On his solo albums, as well as in his solo live performances, Bukelman opts for the acoustic guitar, adding also banjo and some percussion - all played simultaneously.  In his exploration and his search for his own new language, Bukelman uses a special set up, in which he places all his instruments in his reach, so while holding his guitar he can strike his banjo and his percussion, moving naturally with the waves of the music. Besides his acoustic works, Bukelman is also currently active in the unique, experimental EFT (Electro Free Trio) - a bold attempt to fuse free improvisation and real-time electronics, in the fields of free jazz, rock and noise. Bukelman is one of the three founders of the avant-garde label OutNow Recordings. In 2011 he released four cd’s under his own name: Cracked Song, Solo, EFT and The Door. Bukelman is also an educator. He teaches improvisation, coaches and guides groups that plays free improvised music at “Muzik” college in Tel-Aviv. Born in 1981, lives in Tel-Aviv.